There's a lot going on in politics right now with Brexit here in the UK and the soap opera like US primary season across the pond, leading into November's presidential election, which is bound to be equally explosive. Both still have a fair way to go but it can't hurt to lay out the betting odds so that we can return to them later down the line. In this first post I'll cover the EU referendum.

With daily scaremongering from both side and interjections from across the pond (Obama etc) the IN and OUT of the EU campaigns have already taken off the gloves. I can only imagine how low they will both be willing to go in the run up to the referendum which is being held on Thursday, 23rd June. Most newspapers of course have a slant of their and own only tend to highlight polls that push their own particular point of view. Even collating polls in a seemingly unbiased manner can be problematic, as various polling companies are known to be somewhat partial in one direction or another, with polling itself being used to influence opinion. 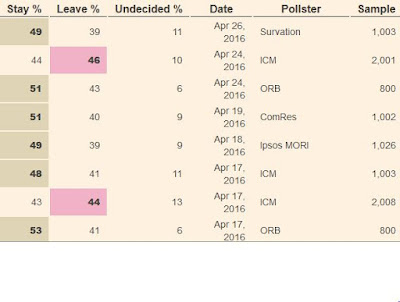 The whole polling industry in the UK is all over the place compared to the US where you can generally gleam a lot of insights from polling data. For what it's worth though, above I've included the most recent poll data available. From this alone it would appear that the IN campaign is still in good shape. It does seem somewhat at odds with the media push though and also anecdotally when I ask people how they intend to vote. Then again that's of limited help as I live in one of the most conservative parts off the country.

Here are the current betting odds from various bookmakers courtesy of Odd Checker:

These broadly fall in line with the polls right now, though with a while to go until the referendum anything can change. Also, certain demographics such as the elderly tend to be more eager to get out to the polls. They're a group that tends to favour the OUT vote. There's a way to go yet and so it will be interesting to follow up on this in a month or so to see the lay of the land then.
Posted by G
Email ThisBlogThis!Share to TwitterShare to FacebookShare to Pinterest
Labels: eu, politics, referendum