The Three Lions will, just as they did in UEFA Euro 2016, play Wales in a major tournament. Having had Scotland in the last Euros and now Wales in this FIFA World Cup, England are getting used to a little domestic punch-up at competition level. This game, though, could prove the most challenging of the group for two reasons. One, they will face Wales who might already be in a qualification position – and two, they will be facing Gareth Bale.

Is the LAFC star in his vintage? Absolutely not. But, as his goal in the MLS Cup Final showed, he can still do it when it matters. And if you don’t believe that a passionate Welshman would not love to cap his only World Cup with a goal against England? Well, what do you believe?

Wales will be 100% up for this, and given it is the last game of the group they need to win and for a draw in the Iran vs USA game to make it into the knockout match. It's doable, but approaching longshot territory for both to happen.

Who will win this tie?

Both teams will be up for this, as much as they were in 2016. Yet while Wales have regressed to an extent since then, England have improved, but have had recent rocky form. They crashed out of the 2016 tournament in joke circumstances, but have since reached at least the Semi Finals of both tournaments since.

Wales are a good team – well-structured and capable, and have an immense team spirit. Expect them to be up for this, but in my view to just fall short. 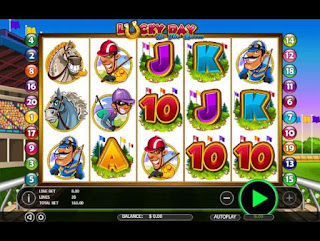 Powered by Pragmatic Play, Lucky Day at the Races is a horse racing themed slot with 5 reels and 20 paylines. Whether you play on desktops, tablets, or mobile phones, it's sure to offer some immersive gameplay. The wagering amounts start from 0.20 to 100.00 per spin. Players can win up to 7500 coins by picking horses in the Play the Ponies Bonus feature.

In addition to the bonus features, a whopping 60 Free Spins can also be won, as part of the Free Spins feature. Get ready to hit the finish line and saddle up for an exciting ride.

The Trophy symbol is the Wild symbol in Lucky Day at the Races, replacing all other symbols except for Scatters and Bonuses. A payout of 10000 coins is given when five Wilds land on a payline.

Upon landing three or more horse and jockey symbols, you'll trigger the Play the Ponies Bonus. Next, you need to choose a horse from a list of horses. Depending on where your nag finishes, you will receive a cash prize. This also depends on how many bonus symbols are activated, the following rewards are offered:

This entertaining horse racing themed game, Lucky Day at the Races from Pragmatic Play has a lot to offer. Friday, June 22, the penultimate day of Royal Ascot 2022, proved eventful, for contrasting reasons, for two punters who placed through-the-card, seven-fold accumulators. You may have already read about the unfortunate Bailey Grant, who missed out on £83,638.75 by cashing out his £1.06 each-way accumulator for just £463.75 after his first four selections were successful.

However, there was better news for an anonymous William Hill punter. Like Grant, John Doe correctly selected the first four winners, Meditate, Perfect Power, Candleford and Inspiral, in his £2.50 each-way accumulator. Unlike Grant, though, he kept faith in his remaining selections and gained just reward when Heredia, Changingoftheguard and Latin Lover all prevailed, making his bet a winner at accumulative odds of 122,889/1; for the record, those are longer odds than for dying in a skydiving accident or aliens landing on Earth. In any event, for his modest outlay of £5, the plucky punter received £307,464.02. The lucky winner was unavailable for comment but, no doubt, felt a sense of satisfaction that he had held his nerve and prospered in a situation where others had come unstuck.

Tony Kenny, Head of External Communications at William Hill, said, 'Many of our customers try going through the card at the bigger meetings like Royal Ascot or Cheltenham, but few manage it. However, one pulled off the incredible feat of successful choosing all seven winners on the penultimate day of the Royal Meeting at a frankly ridiculous price of 122,889-1.' In the words of Mandy Rice-Davies, 'Well, he would, wouldn't he?' For those of you watching the BGT final this year, you may, like me, have been surprised to see the level of talent on display. I'm not typically all that into the programme to be honest, but found this year's finalists to be a professional and plucky bunch all giving it their all across the board. It was certainly a hard one to call, and sometimes the running order factors in to an extent, but in any case here are the voting percentage results for the final. Well done to :

Many congratulations to worthy winner Axel Blake, and a shout out to the super talented Jamie Leahey too, as he surely has a very bright future!

Who would believe that we'd actually have a good songs as our Eurovision entry  for once in 2022. Super talented Sam Ryder has certainly knocked the ball out of the park with this catchy and anthemic song, and social media feedback seems to suggest that many around Europe also view it as a favourite of theirs. In the betting odds, perhaps understandably, Ukraine's entry is odds on (2/5), so the outcome may be drifting towards a foregone conclusion, but the UK entry is currently second favourite (6-1), which is certainly at this stage an achievement in its own right. If we manage to put up a good or decent showing points-wise we can't complain, and it'll certainly made a change from the usual languishing in or near last place. Good luck, Sam!
Posted by G No comments:
Email ThisBlogThis!Share to TwitterShare to FacebookShare to Pinterest
Older Posts Home
Subscribe to: Posts (Atom)

If you are looking for the best online casino portal, visit casinoandy.com today.