In horse racing, what is a penalty? 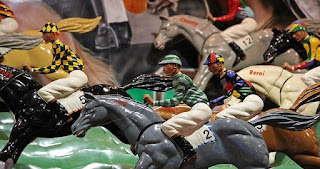 In horse racing, a penalty refers to additional weight carried by a horse as a result of its previous performances on the racecourse. In a handicap race, each horse has an equal chance of winning so, by definition, a horse that wins a handicap must have performed better than its official handicap rating, so a rise in the weights is necessary.

Of course, it's possible that the same horse could be entered in another handicap before the team of handicappers at the British Horseracing Authority (BHA) has had the opportunity to revise its handicap rating. In that case, the horse in question will carry a penalty, say 6lb, which is denoted by '6ex' immediately to the right of its allotted weight on the racecard. In some cases, penalties may also be incurred by horses that have won a race, or races, above a certain 'penalty value' in a specified period.