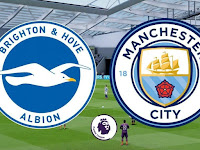 With the Premier League title on the line, Manchester City travel to now-safe Brighton and Hove Albion. Funnily enough, the freedom from relegation might just open Brighton up to give a bit more than they usually can in the big games. With so much sitting on this one match, though, it’s hard to know how the nerves will impact upon City. The Citizens have been tremendous in 2019, their UEFA Champions League defeat aside, so a slip-up would seem very rare indeed. Stranger things, though, have happened (have they?).

The Seagulls arrive at their last home game of the season knowing they’ll compete for a third year in a row in the Premier League. That should give them some relief from the challenges and fears to come. Jose Izquierdo and Davy Propper will miss out here. Expect to see Anthony Knockaert play again, as well as Pascal Gross.


Brighton will be reliant, as ever, on the goals of Glenn Murray. If they are going to shock the world, it’ll be down to the big man up-front.

Meanwhile, City are without Kevin de Bruyne and most likely Fernandinho. However, Liverpool fans should not get too excited; City have been missing the dynamic duo for some time now, and have kept the wins rolling in. If they miss out, expect Phil Foden to take part in this showpiece occasion, with Ilkay Gundogan and David Silva likely to play alongside him.


Bernardo Silva and Raheem Sterling will power the flanks, with Sergio Aguero likely through the middle.

City win. If they slip up now, it would probably be the single greatest slip-up in English history – unless Liverpool manage to fail as well. They have won 13 on the spin; it would be an incredible shock to see them do anything other than make that 14 wins in a row.


City to win, and lift the title in the process. There’s a reason the ‘real’ Premier League is going to Brighton, and a replica is heading off to Anfield: the chances of a City slip-up are almost nil.
Posted by G
Email ThisBlogThis!Share to TwitterShare to FacebookShare to Pinterest