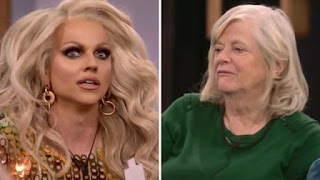 I have a love-hate relationship with Big Brother. When it started 'back in the day' it really was something new and different. Sure there was a novelty value, but a fascinaation too with the likes of 'Nasty Nick' becoming a villian to the whole nation over the period of a few days. On top of that, nobody taking part knew the first thing about how to approach the show, so there was an innocence to it. Now of course it's very much for the fame hungry, and as such it just bores me. The one version of the show that is perhaps worth watching though, is one where those taking part have already previously achieved a certain degree of fame, namely Celebrity Big Brother.

The year of the woman theme has certainly had an impact on how it's panned out and this years show has seen a really interesting bunch of people come and go. It's been rather harmonious in its own way, which has made it subtle at times, not something you'd usually say about Big Brother. But now we're down to the final five, with what appears to be two main challengers for the win, though with the exception of the entertaining Wayne Sleep I'm not sure we can truly rule anyone out 100%. Perhaps the 20-1 on offer for Shane Lynch and Jess Impiazzi is about right.

Big Brother did us a favour of sorts the other day by revealing that the two housemates with the most votes to save were Courtney Act (4/7) and Anne Widdcombe (7/4). This echoed what the odds were telling us and what many already assumed to be the case. Courtney has been up for the public vote on more than one occasion, though both have now demonstratable public support. Anne is now without her seemingly immortal gal pal Amanda Barrie, but is a one woman army so thaat won't bother her. one bit.

It's very much a toss up in my view, and Courtneey and Anne both represent the opposite ends of the issues, politically speaking, quite well in their own way. They're certainly splitting the audience and when we take previous winners into account, such as Jim Davidson, it's not really possible to go with the assumption that a young audience will be the ones making the decision. Rather than have a bet I'm going to enjoy the show, but if you were to twist my arm I'd say that second favourite Anne is really the more likely winner.
Posted by G
Email ThisBlogThis!Share to TwitterShare to FacebookShare to Pinterest